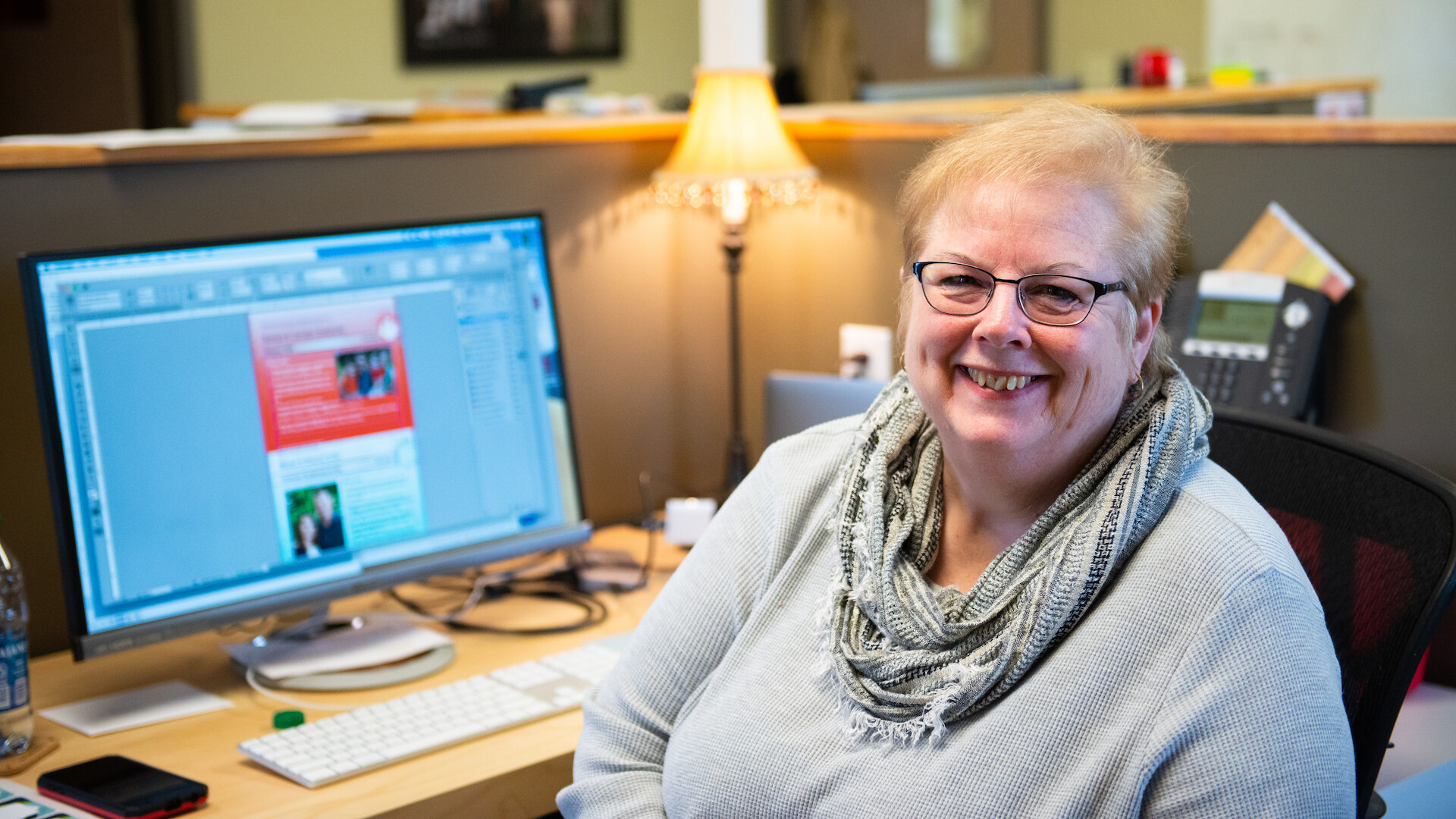 Karen is a Graphics Assistant on our Creative Team, here at Calvary Church! She has a heart for missions, loves going on adventures, and yes — she's a cat person... But give her a chance anyway and read her story to get to know her a little better!

Q: What do you do here at Calvary? 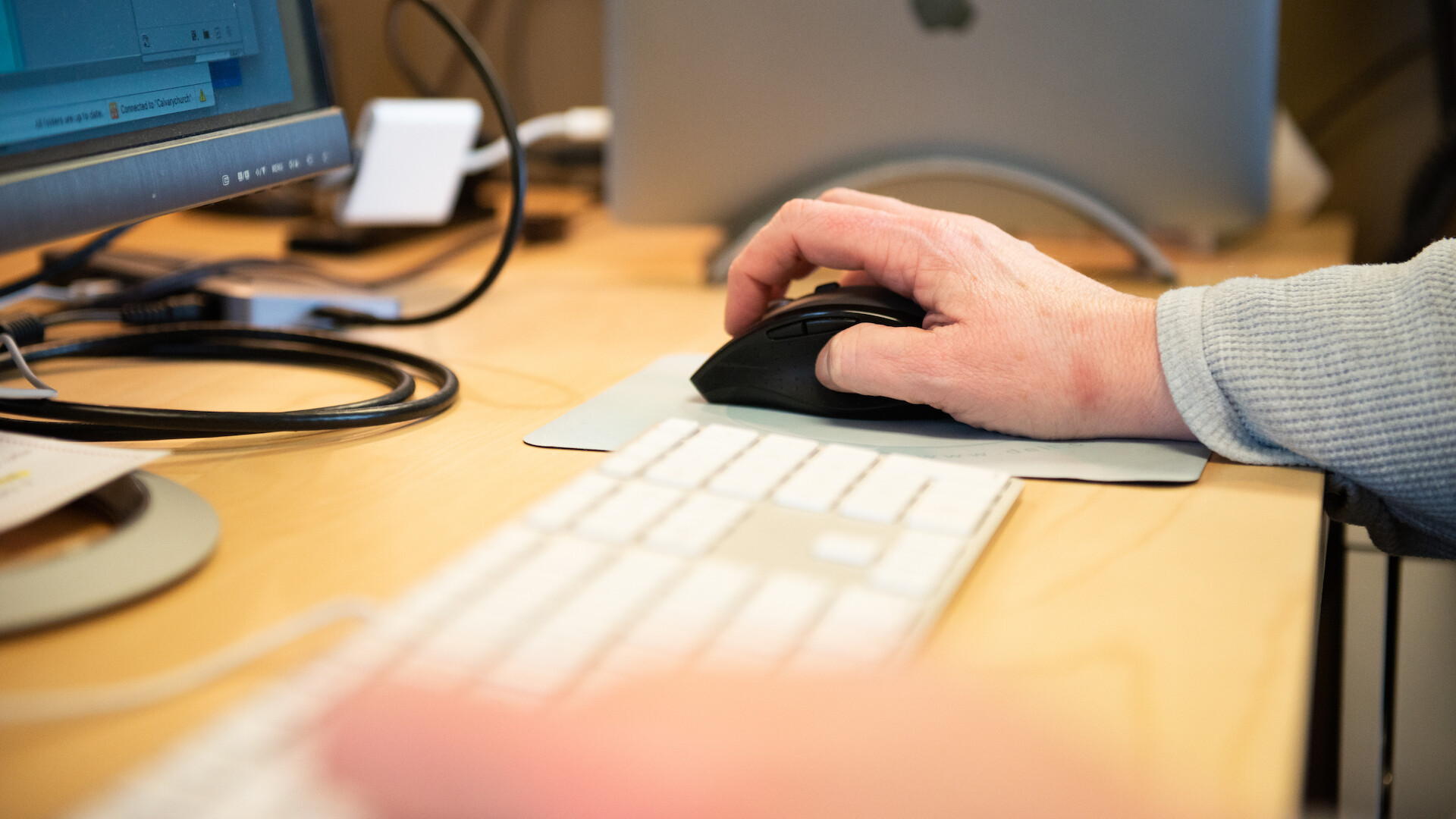 A: I grew up in a town called Myerstown, Pennsylvania, [which is] between Reading and Lancaster, and I went to a very small school. Elementary, middle school, and high school were pretty small, out in the country. And I had five siblings — one sister and four brothers. I'm third youngest, so it's sister, brother, brother, me, brother, brother.

When I was younger we went to a very liberal church, and then my parents realized that they were no longer preaching the gospel, so they moved us out of there. And actually they and two other families started a church which is thriving today. I became a Christian when I was 18. I thought I was a Christian before that, but I think I was living on my parents' faith. I finally realized that I didn't have my own personal relationship with God. ...I knew I needed [Jesus], and I kept being freaked out by the fact that I wasn't sure. ...I was just never sure. So, that's how it came about, because I just was never quite sure of my own salvation...and so I asked Christ into my heart when I was 18. And my dad freaked out a little bit because he thought I was a Christian long before that.

Q: What did life after high school look like?

A: I went to cosmetology school, got my license in doing hair, and I did that for several years. And then I began working for OMF International which is a missionary-sending organization. I was with them for 13 years, and then I was with Christar for 20, so most of my life was working in missions. While I was with OMF [was when] I started doing some graphics, and back then it was putting text in a typewriter, then pushing a button and it would type it on a page, and there was rub down lettering and stuff like that. Yeah — it was really interesting. We got our first computers when I was working there, and the lady who was in charge of that got us Macs, which was really interesting because they were just coming out. And the actual screen was about maybe 10 inches wide. 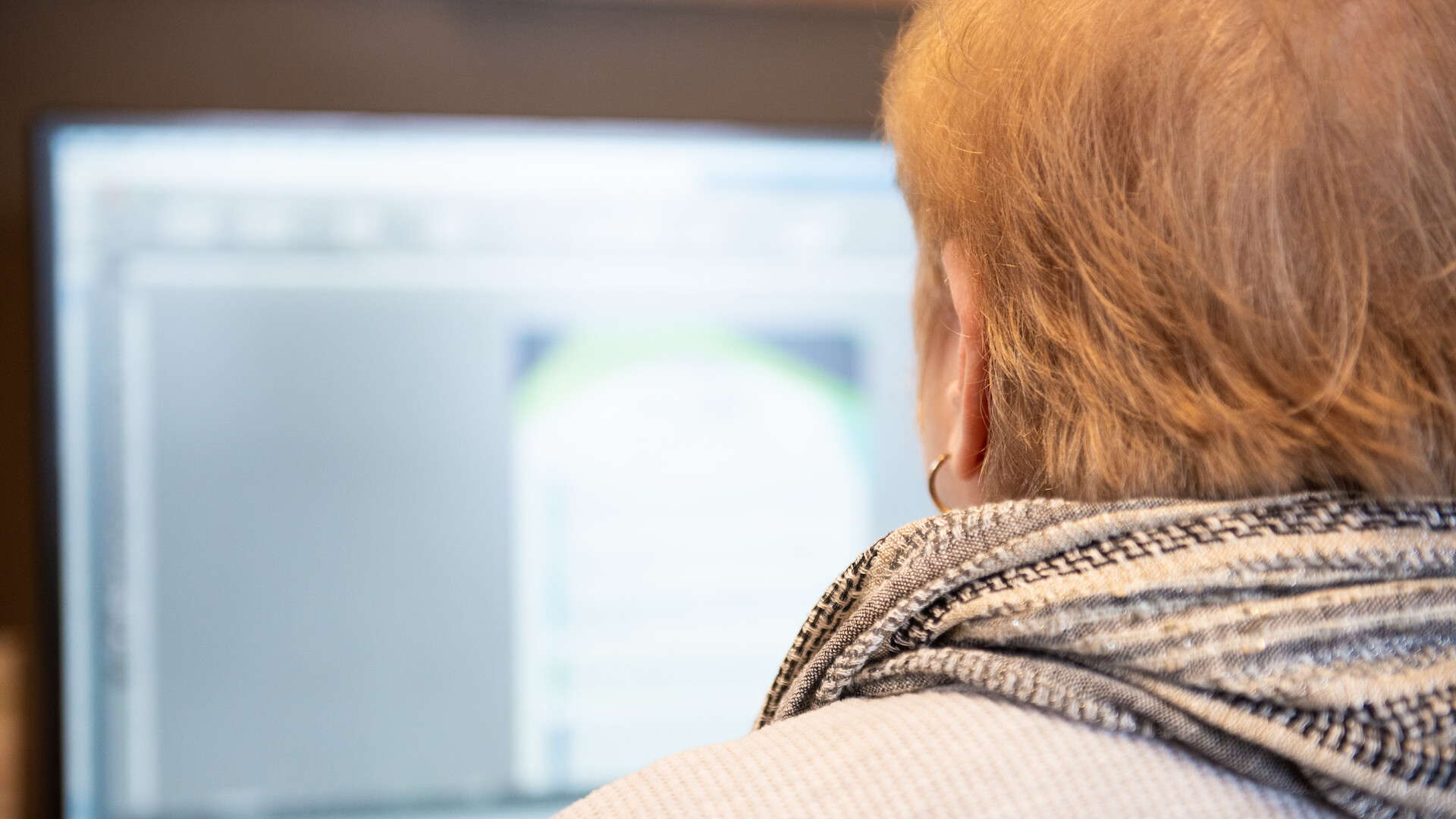 Q: So what brought you to Calvary?

A: I had been going to another church that I liked, but I wasn't quite happy there, and my brother was going here so I decided to come. I started coming to Calvary then and really liked it — I just really, really liked it. I liked the preaching and basically the way things were done here and the fact that I could hear when I left the auditorium, which I couldn't at the other church I was at. And so yeah, that's what brought me to Calvary. I can't remember the year...it's at least 10 years [ago]. ...I was asking around about whether there were any [job] opportunities, and [heard that] Global had interest in having somebody who could do some graphic design, plus other stuff they needed - so that's how [working here] started! [Then] about six or seven years ago...they moved me into Communications. I was still doing Global stuff, but they wanted all "communications" people to be together...instead of having us spread out.

Q: What have been some of the pivotal moments in your life?

A: Well, one of the most fun things I ever did and was also a pivotal moment — it was more than a moment — was [when] I went to Germany to attend Capernwray Bible School for six months, and that was a real learning experience — it was great! I mean, they had speakers who came in from all over the world who spoke there. And so, in that way it was really great. I met people from all over the world. It was one of the best times of my life, I just loved it. I'd love to go back and be 35 again and do it all over. 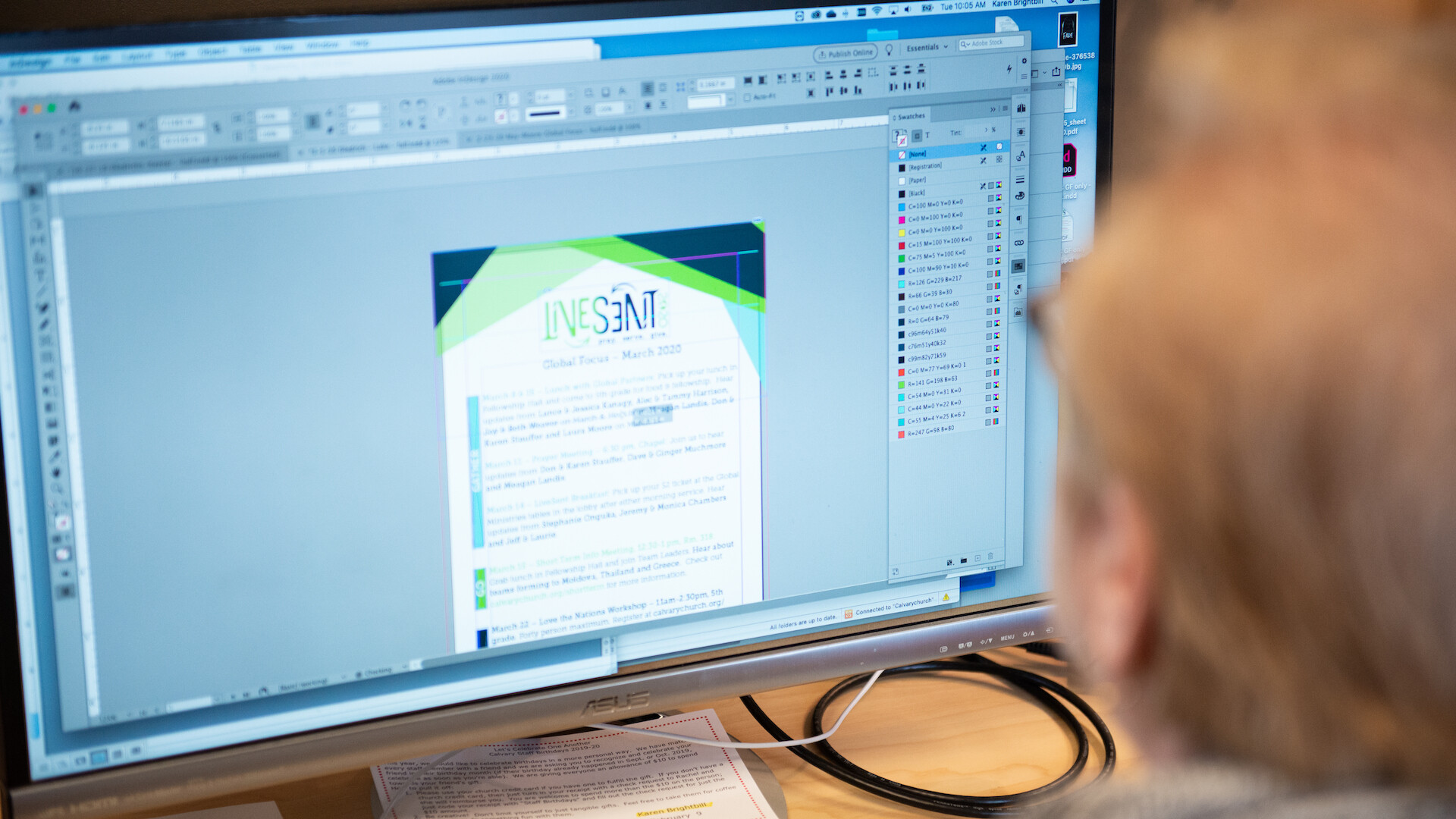 Q: What were some of the difficult seasons in your life that shaped you into who you are today?

A: There's actually several. I mean, one — the church that my parents helped to found, the pastor got a little bit crazy, and I ended up leaving...because of [that] - he was power hungry. And I left very disillusioned; I didn't go to church for 10 years. And it was a bad time for me, but it was also a time when I realized how much I needed God because I just...when something like that happens you just almost leave your relationship with God sometimes. ...That was my home church — I grew up there. We started that church when I was 13, so it was a very difficult time. But I think it has helped me too. Difficulties are everywhere, and I didn't really say, "I'm done with you God," but...not having that kind of relationship with him in tough times is way worse than if you just depend on him in tough times. So I learned that lesson the hard way.

Q: Who are you discovering God to be today?

A: I've had some really interesting experiences recently because of some very difficult things that I'm going through, and I have heard Him speak to me in my spirit when things were tough. Sometimes you just don't think He's there, but He is, and He has shown himself to me in different ways with encouragement of people and just speaking to me in really amazing ways recently. God is faithful, no matter how I act, what I do, what I say or how I feel. When I look at my sin, I can hardly fathom God never changing toward me. But He doesn’t. That’s who our God is. I had a rough time in my younger years. I felt like I could never do enough or be good enough to be accepted. When you feel like that for years and years, it’s hard to see that God really does accept us, with all our flaws. But I have been seeing more and more of God’s loving care and help in my life in the last year and I am so grateful that He redeemed me and continues to work in my heart.

Q: Do you have any funny stories you want to share?

A: Well, something comes to mind... I was lost one time in Philadelphia for seven hours because I have no sense of direction at all, and this was before GPSs. I was with a friend, and we were going to a church thing at that time, but it took us almost a whole day to finally find that place. I got just turned around in Philly and it was terrible. But anyway, we just have laughed about that like crazy since. ...That was brutal. I always tell people "If I am sure I know where we're going, you just go the opposite way" because I am always sure and I am always wrong.

Q: Are you a cat or dog person?

Q: Anything else you want people to know about you?