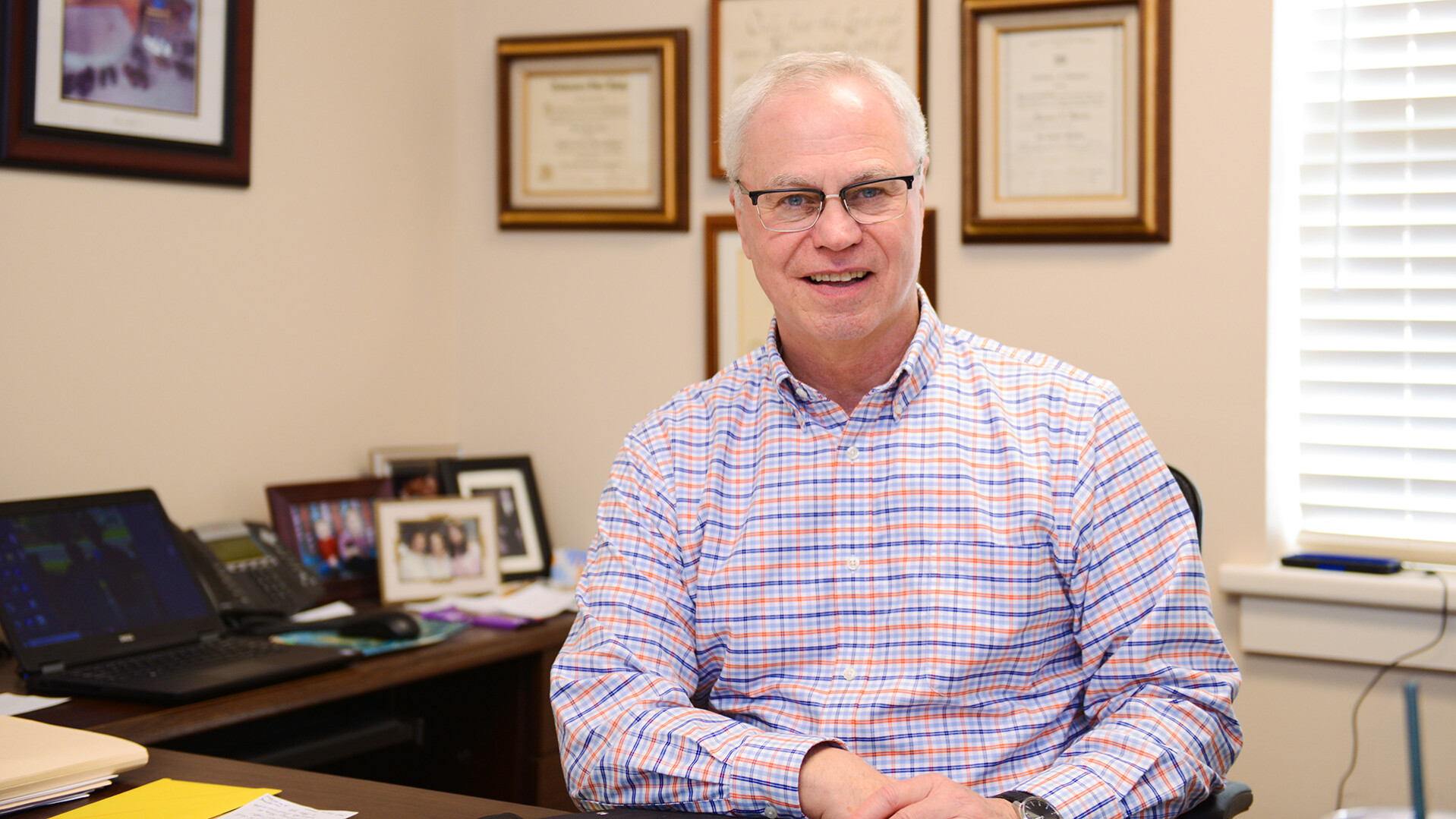 We recently celebrated Steve Beirn, Pastor of Global Ministries, for 30 years of service here at Calvary. Even though he has served in a few different positions over the years, he has always had a consistent heart for the nations. We got a chance to catch up with Steve and hear from him in our latest Meet Our Staff blog post!

I would say that what I enjoy most is the shepherding perspective of [my position]. So the shepherding could be giving counsel, input, sometimes it's just ministering to them because they have a need, or it's encouragement. Sometimes it's planning... I have some of that shepherd's heart in me, and that's really coming alongside and assisting [my team members] and making sure that everybody's kind of firing on all the cylinders. So that's what I love.

Q: Tell us about all the different roles you have had here at Calvary.

A: Well, my first role was...at that point...they called it the youth pastor. But it's essentially the same Student Ministry kind of arena. I spent eight years doing that. During those eight years, we kind of integrated some of the missions flavor into that young adult generation. And then from there I actually made a transition to evangelism and discipleship, working with adults. Some of them were young adults that I had when I was working in Student Ministries, but some of them were adults throughout the church. That was one of the closest things that we had to a Missions Pastor at that time because the church didn't have a Missions Pastor then. In some of those earlier days, it was almost unheard of to have somebody like that. But I got integrated into that over time, and that's what eventually led to my role as a Pastor of Global Ministries.

A: I grew up in a home where my mother came to know the Lord shortly after my parents married, but my father didn't know the Lord. It was kind of a mixed bag. Sometimes there were actually arguments about going to church and things like that, and I was just a little boy watching all this - taking it in. I ended up, because my mother made sure that I got to church, going with my mother quite a bit. What ended up happening is I heard a lot of the same things at church that my mother was privately sharing with me - with us boys in the family - and it was largely due to my mother's influence... I was just eight years old at the time. But what also is interesting, is the church that I went to really operated like a church that you would love to be a part of, because I was just a boy going to church with his mother.

But I had men in our church who really took an interest in me. And I attribute all of that to why I'm such a diehard churchman now - why I love the local church. Because I can remember all those days when I didn't have any encouragement from the man in the house...but I got plenty of that at church. I got a good dose of some really good things and that was a big influence on my life. And I would say just what ended up happening is the Lord used a lot of what my mother shared and then also the children's edition of Pilgrim's Progress. That was used in my life to bring me to a point where I knew I didn't have an assurance I was going to heaven, and that's when I ended up decisively dealing with that, even as an eight-year-old.

Q: How did you end up coming to Calvary?

A: Well, the story is when I was still in college, I worked at Harvey Cedars Bible Conference in Southern New Jersey, and I actually oversaw a youth discipleship program there. I put in four summers there and developed some of this discipleship. Well at that time, there were people from Calvary Church that came down to the Bible conference, and they saw what I was doing there with the high school kids that were available as summer staff, and they knew that Calvary Church was looking for a youth pastor. So they put my name in.

I didn't even know that. And then I got contacted by Calvary. Then what happened was I made an erroneous assumption. I thought that Calvary Church, being a bigger church, was similar to some of the bigger church experiences that I had had, which were not positive. I mean, in terms of certain things that they called ministry that I thought were babysitting. So I actually wrote them a response to an inquiry, and I said, "I'm just not your guy, and I'm not your guy because I really have a passion to do this, this, and this." Well, when they got the letter back from me, they were like, "Oh goodness, this guy doesn't know anything about us. That's exactly what we are looking for." It was actually Pastor Creighton that got on the phone and called me right away, and he said, "I think it would be really important for us to meet."

Q: How did you meet your wife, Lorraine?

A: We met while we were in college, and I knew her for a while because I actually played a lot of sports with her brother. She has an older brother and it was through that [connection] that we just got better acquainted. We spent probably the last two of our four years in school together, and then about six months after we were finished with college with the undergraduate studies, that's when we married - in January of '76. So...it'll be 44 years [of marriage] in January.

Q: You've served at Calvary for 30 years, what have been some of the highlights?

A: When we first assumed the responsibility as the youth pastor at Calvary, within a short time, I realized that there was a gap between some of the older adult generations in the church and what the young adult generation was like - and especially as it compared to missions passion. And I felt like we really need to remedy the lack of missions passion with some of that young adult generation coming up. So I started investing heavily into that, and one of the things that we did was we actually introduced the short term missions emphasis here at Calvary Church. My first trip was in 1977, and that was actually, according to the records, the second short-term mission trip ever taken.

That was a pretty radical thing because there were a lot of people that were like, "well why do they want to do something different? What was good enough for my generation should be good enough for this next generation." So over like a 10 year period of time, we began to see lots of life change that took place through those short-term trips. We did a wide variety of things, and now we kind of developed the groundwork for everything that's happened with short-term.  It's just kind of fun to be able to see the end result of all that. So that's just a general highlight for me.

I can actually remember a couple of specific things. We also had a student missions conference, it's been [going] for years, and they had it when Lorraine and I returned, called the Vision Conference. And I can remember the early days, the formative days of that. And...in March of 1992, there was a service on a Saturday night as a result of what was called student day...before the vision conference, and a person who was speaking gave a public invitation to come forward, and it was basically to [say] "Hey, be available to do the will of God, whatever that means, even if it means going overseas."

So what ended up happening, totally unanticipated, is that there were over a hundred high school kids that ended up coming forward. And then what ended up happening was when they came forward upfront, they all got down on their hands and knees and somebody came up to me and they said, "What's going on?" What did you tell them to do?" And I said, "I didn't tell them to do anything." So it was really quite a memorable moment because there were students that were actually trying to really do business with God. So for me to see that and to be a part of that was pretty special. Some of them are in the church today, and they can remember that same time when they went up, then they said, "Well, we saw other people getting on their hands and knees. We thought we needed to get on our hands and knees. And we all did." Over a hundred of them up and down the aisles. So it was really quite something. So that was one of my more memorable moments.

Q: What are you learning about God these days?

A: Well, I continually try to evaluate and think about how capable God is and how much I need him. Over the years you run into what you think are insurmountable things in the ministry and they're not insurmountable at all to God. I think that's been a continual lesson for me. And maybe because I'm a bad learner, I've got a big learning curve here, but I think that's been a big thing.  As I've had the experience of seeing God come through and do some things and even exceed our expectations in some respects or just minister to us in special ways, I think I've just grown to have a real confidence in the Lord, and things don't seem to be big deals to me because I know they're not a big deal to God.

Q: Anything we missed?

A: I always have mentioned that when I reflect back on 30 years, there are a lot of things that I was a part of, but there were a lot of things that Lorraine was also a part of that don't necessarily go noticed. I've said behind every good man there's an even better woman. So that's really true in our case. Whenever we've been able to celebrate anything as a family, as pertains to ministry, we are pretty careful to recognize that...it's teamwork. It's not just any one person.