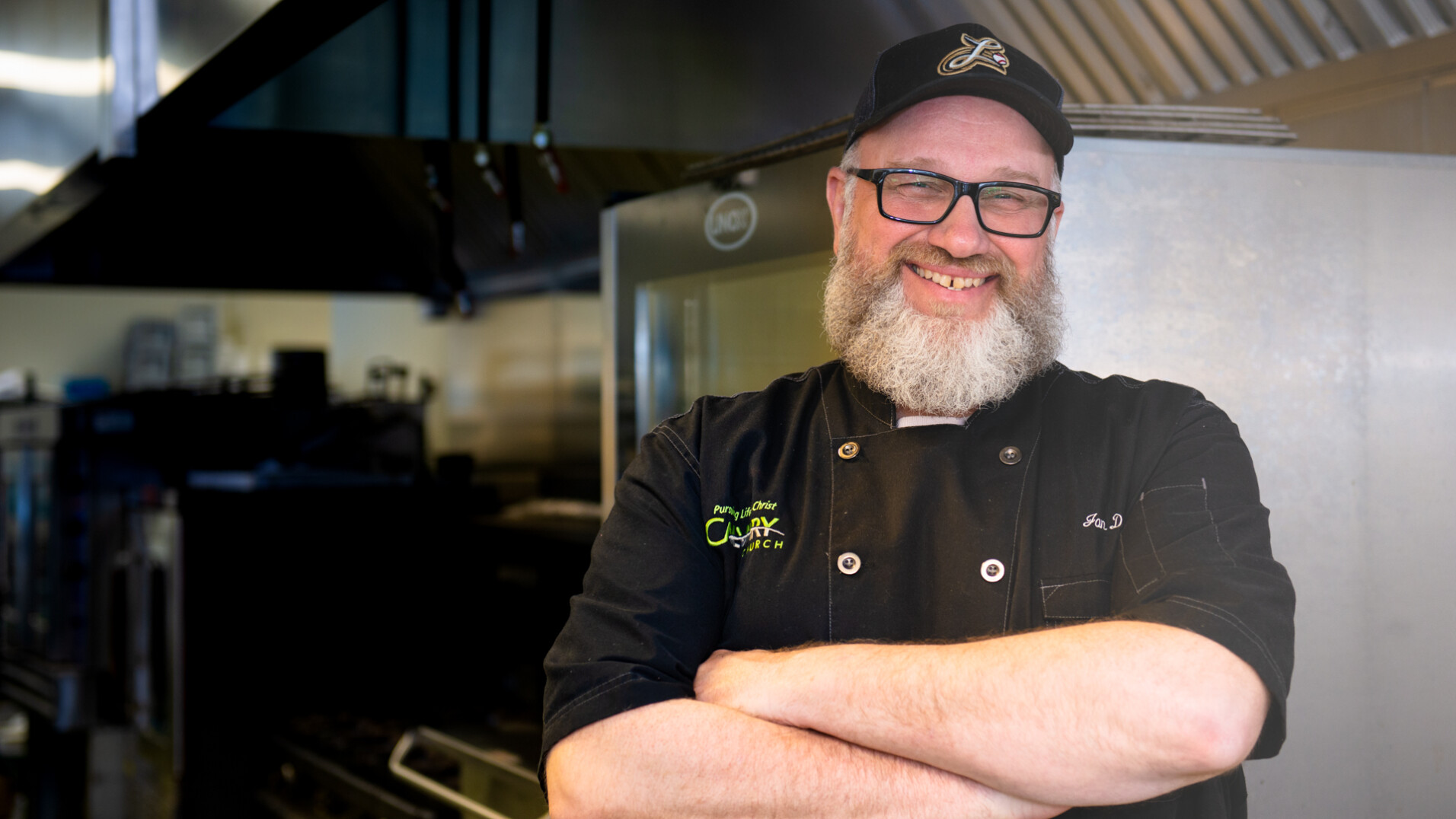 We selected our Director of Food Services, Jon Deitz, to be our very first Staff Highlight, and he graciously agreed. Jon is a personable, humble, fun-loving guy and exemplifies well what a follower of Christ should look like. He is married to Heidi, his wife of 23 years, and father to their three children, Aaron, David, and Hannah. We hope you enjoy the following interview and that you walk away knowing just a little bit more about the man behind any and all food-related events at Calvary Church.

A: Well my title is the Food Service Ministry Director. And what that means is that I’ve got my hands in a little bit of everything that’s related to food, whether it be the Wednesday night meal, whether it be Sunday lunch, Monday dinners, large events – we just finished up a giant event for 2,000 plus people for two days; we served over six thousand meals – and all the way down to an ABF (Adult Bible Fellowship) lunch of 30-40 people. So my scope is gigantic. Another thing is I get to just reach out to people as they’re here helping serve and remind the volunteers that they’re helping other people’s lives. The one prayer that we do every Wednesday before we get started is [to ask God to] give us the words and be there at the right time when that person comes to have that conversation – the conversation. I’ve gotten a lot of feedback from my volunteers about how much they appreciate that. Some days they just come in…and they’re not having a great day, and that [prayer] just puts them back to center.

Q: You are full time, correct?

A: [Laughs] If you want to make some sort of question of, “what’s the question you get asked most,” that’s the question – “Are you full time here?” [or] “What do you do for a living?” Yeah – I’m full time here. I was asked that at the end of my 80+ hour week with the REACH festival, and I just smiled – I always laugh and giggle to myself – and I said, “No, this is my job – yeah.” “Really? They have enough work for you?” “Yeah, they do. They keep me busy.”

Q: How many people are on your team? Specifically, paid staff.

A: Paid staff – I would say, just pulling numbers out of the air here - about 25 or 30. But there’s a catch to that. I have Stevie (I call him my lovely assistant); he’s a Vietnam vet…he’s my only prep help. So you’re looking at the burden carrier. I have…maybe 4 or 5 dishwashers and the rest are servers, so the serving capacity is whenever we have events. We go through seasons of the fall and seasons of the spring when we’re inundated, but then we have dry periods.

Q: Going back to learn some of your now, where did you grow up and what did early years look like for you?

A: I grew up in a little town called Quentin, in Lebanon County, and I graduated from Cedar Crest [High School]. I played football, baseball, basketball, and [during my high school years] I got into the Hotel Hershey apprenticeship. So I apprenticed there for four years, did an internship at the High Regency Grand Cypress in Orlando with a Master Chef, which was really cool, graduated from that in the early 90s, moved to The Franklin House in Schaefferstown - that was my first Executive Chef job – and that’s where I met my wife [Heidi]. And [our] joke was, “She was my dishwasher - now I’m hers.” We actually moved four houses downhill from The Franklin House; that’s where we reside now. [That’s where we’ve lived] for the past twelve years.

Q: When did you know you wanted to be a chef?

A: Well, my dad kind of sat me down at thirteen or fourteen and said, “You need to figure out what you want to do so we can come up with a plan to get you there. Do you want to be a plumber? Do you want to be a mechanic?” And I said, “Well, I like to cook!” So we went to talk to a guidance counselor, [and he] encouraged us to think about the culinary field. [So] I went to a vocational-technical [high school]. My senior year I was of the [year at my] vo-tech. And that was the beginning of the journey.

A: Well, I was born and raised Catholic, and I still try to honor my mother and grandmother by observing lent and [being] aware of things that go on, but when I was an apprentice at Hotel Hershey, I had veered off the right path. I had two chefs who were Christians, and they would have talks with me to encourage me, to mentor me, and bring me back to center. It was probably my second year there that they led me to Christ. That walk wasn’t a direct walk to getting back into the “straight and narrow,” but that was the foundation. And then my wife came along – my wife is the daughter of a Nazarene minister – and her faith was very strong. She helped guide me to the spiritual leader of our family.

Q: What brought you to Calvary Church?

A: There is a long road that led to Calvary, and, you know, I often use the phrase or the thought process of everything that I did leading up to this point was in preparation for me to come here to serve the Lord in multiple capacities. The road from The Franklin House to right before [the Calvary opportunity] was paved in country clubs. I cooked at country clubs and worked my way up to Assistant Manager and then I took over a country club – I was recruited to become the Food and Beverage Director of a club in the Poconos that had multiple facilities. And then from I was recruited to run a golf country club in Hazelton, and I became the General Manager of that. …And then the stock market crashed, and I was having difficulty finding another position in that particular field, so I had to reinvent myself. And in the reinventing process, I ended up working with the Dutch-Way Company as the Restaurant Manager at their new store. [Shortly after], they moved me around, and I became their Food Quality Manager for the restaurants. I heard of the [Calvary] opportunity through the very tight-knit sales community and chef community of food service. A sales rep came and said that he had heard about an opportunity that I might like, and that started a multiple interview process with the executive leadership of Calvary.

Q: How long have you been at Calvary?

Q: We know you did some ice sculpting at some point in your career; where along that journey of your growth as a chef did that occur?

A: Hotel Hershey. We had projects that were due usually [for] Sunday brunch, and projects consisted of pâté mirrors, mirrors, and ice sculptures. So [for] my first ice sculpture, I a 300lb block of ice, a handsaw, and a five-prong chisel. I was working on geometric shapes, so I made a sphere and a cornucopia that was on the other side of it. So that started it, and then I progressed over those four years, culminating with being in the  Ice Festival in Wilkes-Barre with another apprentice. I don’t remember what we did there – it was cut-as-you-can as fast as you can for 24 hours. It was fun.

Q: If you could cook and prepare a dream meal, what would that be?

A: I think I’d just focus everything on the entrée – you always focus on your entrée and then you build around the outside of that. I’ve always liked to do crazy things with beef tenderloins – not doing a filet, not roasting the whole thing – you can wrap it in bacon, you can wrap it just plain, you can season it, you can put a rub on it, you can do all kinds of crazy things with it, but I’m a purist with that. I would like to have it just seasoned with some salt and pepper, roast it, and slice it medium-rare, and then make a bordelaise sauce. As simple as that sounds, I was taught simplicity is elegance. So if you do it just right, and you adorn the plate just right… Nothing better.